NOUMENON is one of Publishers Weekly’s, Barnes & Noble’s, and Kirkus Review’s Best Books of 2017!

Purchase at Barnes & Noble, Amazon, or through your local independent bookstore via IndieBound.

Astrophysicist Reggie Straifer has an idea. He’s discovered an anomalous star that appears to defy the laws of physics, and proposes the creation of a deep-space mission to find out whether the star is a weird natural phenomenon, or something manufactured.

The journey will take eons. In order to maintain the genetic talent of the original crew, humankind’s greatest ambition—to explore the furthest reaches of the galaxy— is undertaken by clones. But a clone is not a perfect copy, and each new generation has its own quirks, desires, and neuroses. As the centuries fly by, the society living aboard the nine ships (designated Convoy Seven) changes and evolves, but their mission remains the same: to reach Reggie’s mysterious star and explore its origins—and implications.

“Lostetter handles a complex and fractured narrative masterfully, never allowing her novel to become confusing or unconvincing. There are no easy answers to the book’s questions, but the lingering sense of wonder and discovery thoroughly justifies its title.”

“This spectacular epic examines everything from the nature of civilizations and societies to the tension between nature and nurture. Lostetter expertly balances the thrill of discovery with the interpersonal consequences of an isolated community. The tools of speculative fiction are deployed with heart-rending attention to emotional reality in this enthralling odyssey.  A striking adventure story that could hold a galaxy in its scope, this is an expedition that delves as deep into the human thirst for purpose as it does into the wonders of the universe.”

“The plot is a swift-moving ocean current that will sweep you up, envelop you, and not let you go until you’ve reached the end, finally tossing you ashore, rattled from the experience. I read it in one sitting, because I had to know: what this clone society would find when they reached that distant star, and what terrible sins they would commit along the way. I had to know it all.”

“Noumenon explores how our sense of home, of community, of shared culture and experience changes over space and time. Through a narrative of strung-together vignettes spanning centuries, leadership struggles, and challenges to the very fabric of social order and socioeconomic hierarchy, Noumenon is an utterly complex piece of SFF awesomeness.” “And, damn, I loved it.” 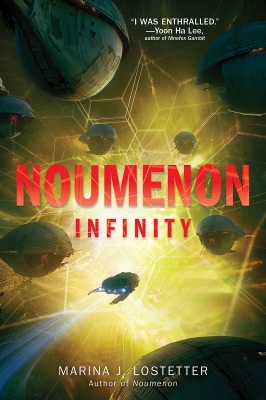 Order at Barnes & Noble, Amazon, or through your local independent bookstore via IndieBound.

Travel to the remote reaches of deep space in this wondrous follow-up to the acclaimed Noumenon.

Generations ago, Convoy Seven and I.C.C. left Earth on a mission that would take them far beyond the solar system. Launched by the Planet United Consortium, a global group formed to pursue cooperative Earth-wide interests in deep space, nine ships headed into the unknown to explore a distant star called LQ Pyx.

Eons later, the convoy has returned to LQ Pyx to begin work on the Web, the alien megastructure that covers the star. Is it a Dyson Sphere, designed to power a civilization as everyone believes—or something far more sinister?

Meanwhile, Planet United’s littlest convoy, long thought to be lost, reemerges in a different sector of deep space. What they discover holds the answers to unlocking the Web’s greater purpose.

Each convoy possesses a piece of the Web’s puzzle . . . but they may not be able to bring those pieces together and uncover the structure’s true nature before it’s too late.

“[A] breathtaking sequel to Lostetter’s critically acclaimed Noumenon… Sci-fi action and adventure held together by universally human themes; this is the genre at its very best.”

“[An] ambitious and effective sequel to Noumenon.” 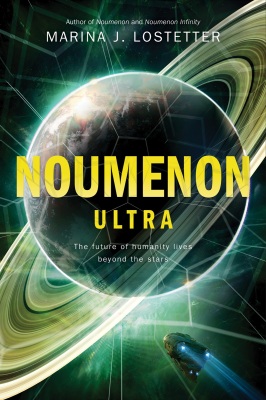 Order at Barnes & Noble, Amazon, or through your local independent bookstore via IndieBound.

The mind-expanding journey that began with Noumenon and Noumenon Infinity continues in this wondrous mosaic tale of deep space exploration, adventure, and humanity that blends the awe, science, and speculative imagination of Arthur C. Clarke, Neal Stephenson, and Octavia Butler.

Deep in the heart of an alien mountain range, I.C.C. has lain dormant, its ships silent, for eons. Now, after one hundred thousand years, the AI is awakening. Someone is roaming the convoy’s halls―someone that isn’t human.

This planet, Noumenon―created by the megastructure known as the Web―is too young and brutal to have evolved intelligent life. Its surface is bombarded by unusual meteors. Crystal trees abruptly and violently arise from its bedrock. Its solar system is surrounded by a frightening space-time anomaly. So where did these visitors come from? What do they want? And do the people of Earth, whose ancestors launched Convoy Seven, know they are here?

I.C.C. reaches out to the descendants of its convoy crew to help decipher this primordial riddle. Noumenon was created and seeded by ancient aliens, and clearly their plans for it are unfinished. Together, the AI, the new lifeforms who have awakened it, and the humans will embark on an epic adventure of discovery billions of years in the making.

Don’t forget to look for the international editions: